ROCK FROM THE MOON

Our only natural satellite has been arousing curiosity throughout human history. A tremendous amount of effort has been put into the Moon Exploration Project. A manned flight to the Moon and safely back to Earth in the 1960s laid the foundations for modern space exploration and pushed the technological boundaries of the feasible. These limits have not changed significantly in the following 50 years since the first landing of the Apollo 11. 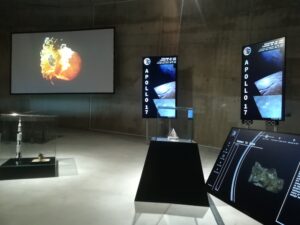 The samples transferred from the Moon have indeterminate value and have helped answer many questions about the origin and the composition of the Moon. Some of them were used by NASA to promote the findings and importance of space exploration for all mankind and can be seen in selected museums around the world.

With the help of the U.S. Embassy in Ljubljana and NASA, the Noordung Center was honored to put on display by the end of 2020 one of the most valuable exhibits that have ever come to Slovenia – a rock from the surface of the Moon. 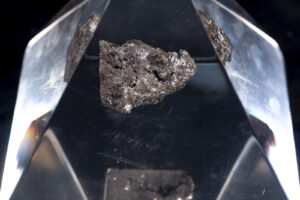 You will be able to see a basalt sample, collected by the astronaut and geologist Harrison “Jack” Schmitt on the Apollo 17 mission. The rock weighs 120 g and is part of the 8.1 kg heavy rock that was brought to Earth as part of the mission.

From September to November, we will also exhibit a replica of Neil Armstrong’s space suit. This space suit that he wore on his historic walk on the Moon is an important historical artifact and is now part of the collection of the National Aviation and Space Museum, Washington D.C. For the 50th anniversary of the first landing on the Moon, 15 such replicas were made with 3D printing technology. Only one, however, was sent to the United States International Organization in Vienna and is now being moved to various institutions in Europe involved with promotion and content in the field of space exploration.

Rich and interesting multimedia content have been added to the exhibition. Take a look at the rock from the Moon and the statue of a replica of Armstrong’s space suit. Get to know the Apollo missions and see what the future of Moon exploration with the Artemis Program holds. Explore the Moon through the interactive multimedia content and discover its most famous craters, seas, valleys and mountains. Find out how and for what purpose astronauts on the moon obtained samples and where they keep them today, and Apollo 17 astronauts will take you to the Moon and back through visualization.

The MOON – One giant leap for mankind